Golf is a sport in which different golf clubs are used to hit a golf ball into a hole. Golf is a sport with a special charm, allowing people to exercise in a beautiful natural environment, cultivate sentiment, cultivate character, and communication skills, known as a “fashion and elegant sport”.

Golf balls are solid small white balls with hard texture and elasticity. The earliest golf ball was a wooden ball, which later developed into a feather leather ball. The golf ball currently in use uses rubber material as the center of the ball, and a ball with better elasticity and longer flight distance is made through a variety of processes.

The surface of the white rubber ball is evenly covered with holes, and the ball with deep holes has a low flight trajectory, which is beneficial to flight and improves accuracy. The number of pits can be seen from the number of balls. Most balls have 324 or 326 pits. now 384 concave balls have been produced, which can fly with a low trajectory in the wind. For symmetry, the number of depressions is usually even.

The United States Golf Association stipulates that the game ball must meet the following indicators:

How do I know what golf ball is right for me?

Golf balls themselves have different hardness. The greater the number on the ball indicating hardness, the harder the ball. The hardness of the ball is based on the batter’s swing strength and swing technique. Generally speaking, excellent professional players should choose balls with a hardness of 90~105.

Young and middle-aged players of the same level can choose this interval hardness ball to use. It is easier to play the ball. Since the hardness of the ball is proportional to the distance, it is not easy for players to grasp the directionality when choosing a ball that is too hard. Because of the high hardness, the time for the club head to touch the ball becomes shorter, and it is easy to miss the ball.

Suitable for beginners and high-level players.

In fact, there is no strict limit for the choice of the hardness of the ball. Players can make choices from their own age, physical strength, technical status, and purpose. The same brand has a different hardness, and there is no difference in moderation, but the feeling of hitting the ball is different.

From the rotation rate

2. The structure of golf balls

This kind of ball can also be called one-body ball or a one-piece header, generally only used in the driving range. The sphere is pressed and painted with hard rubber.

This kind of ball is also called a two-body ball or a two-piece header, the most commonly used ball. The outer part of the center is made of hard rubber, plastic, or other mixtures, and the thickness is about 1mm. Due to different shell compositions, different firmness, different resistance, different hardness, different colors and dents, different characteristics and efficiency are produced. It is manifested in the height, distance, and rolling of the ball.

Two-Piece Golf Balls, used to be called “long-range ball”. The longer flying distance of the ball is because it has fewer reverse maneuvers, and fast speed, and the player has a hard-hitting feeling when hitting the ball. Using advanced technology, we now produce more efficient double-layer game balls. The sphere becomes soft and spins faster, so it is favored by PGA Tour players. At present, most golf balls with long flying distances or wear and tear resistance on the market adopt this structure.

Three-Piece Golf Balls can also be called a three-piece header, which is used by a golfer with a high water supply. A spherical center made of rubber, plastic, or a mixture. The outside of the center of the ball is filled with liquid. The shell is wrapped around a thin rubber strip like a thread. The shell is a rubber product balata (gum). High-level players like to use this kind of colloidal core liquid golf ball. Because it’s easy to control when hitting the ball. But if the shot is not allowed, it is easy to produce cracks and cuts.

In the past, many golfers liked to use the Three-Piece Golf Ball because they paid more attention to the rotation and softness of the golf ball. They would rather not seek to hit the ball far but also want to play more accurately.

The new structure of the golf Three-Piece Ball now produced no longer has this shortcoming. Its flight speed and resistance have been significantly improved. At present, most balls with the highest rotation and the best hitting feeling still adopt a Three-Piece structure.

The stronger the shot, the easier it is for the ball to deform. Multi-layer Golf Balls are designed and manufactured according to this principle. The aim is to produce the best results with any shot.

The center of the ball is designed to facilitate the use of the opening club to hit the ball as far as possible. The middle layer adapts to the irons hitting the ball vigorously. The shell is suitable for obtaining the best hitting feeling and the swing ball when half swinging, cutting, and putting.

The 50-year-old legend used Callaway Chrome Soft X Triple Track golf ball to win the sixth major title of his career. look this The Oldest Golfer To Win A Major. 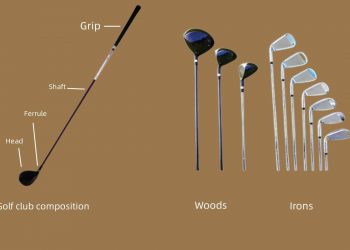